Who would have thought that we were living through a golden age? Possibly the most depressing thought about what is going to happen to the world in the coming years is the fact that pre-2016 will now be fondly referred to as ‘the good old days’. The days where you could laugh off extremist and racist views as those of a dying minority, safe in the view that progression was inevitable and common sense would win the day. The days where you could watch a video on YouTube called ‘Zeitgeist’ and wonder to yourself who on earth would believe such nonsense. The days where you could call George W. Bush one of the stupidest people in history. Well, those days are gone, because 2016 was the year the internet was made flesh, as complexity, nuance and logic were completely disregarded and replaced with lies, conspiracy theories and reality TV stars.

Even still, at possibly the darkest hour in a few generations, time must be made to review the inane and irrelevant things that occurred this year in movies, TV, music and memes. That is the purpose of this post, and I will do my best to stay on-topic. I’ll be back at the end for more depressing thoughts. Here’s a tip: if the text is in blue and underlined, it’s clickable and will explain what I’m talking about

THE YEAR IN MOVIES!

Biggest Let-Down: Ghostbusters. There is a theory going around that Sony themselves were the ones to highlight the sexist comments posted on social media about the new all-female Ghostbusters, in order to give the movie marketing a narrative that didn’t revolve around how bad the movie was. I believe this theory.

Guilty Pleasure of the Year: The Brothers Grimsby. Most comedies these days are absolute garbage, so I have no idea why this one got such terrible reviews. I was laughing throughout.

The Annual “Lesser of Two Evils Award” for which movie was the better of two movies that had exactly the same plot: Captain America: Civil War was the best movie this year about a pair of superheroes being manipulated into fighting each other by sinister forces. On the other hand, I barely remember anything about it, which tells me that although Batman v Superman: Dawn of Justice was bad, it was not necessarily as bad as we all thought at the time.

Amnesia Award for instantly forgettable movie: Several times throughout the year I saw a description of the movie Demolition, starring Jake Gylendhall, and decided that I should sit down and watch it. A few minutes into it, I would realise that I had actually watched it last January.

The (Spoiler-free) Official Verdict On the new Star Wars Movie: I said it this section last year that it has taken me a few years to get on board with the new system of possibly experiencing a new Stars Wars movie every year until I die, but this is what’s going to happen so we might as well get on board. Rogue One is fine, if unnecessary. The opening hour or so is quite boring, but the last 45 minutes or so make up for it. Also, the final scene gives hints as to how the Star Wars series will deal with the death of Carrie Fisher.

Film ad of the Year: The Sun’s front page on June 23rd, combining the newspapers love of leaving the European Union and also its love of Independence Day: Resurgance, which was to be released on June 24th. 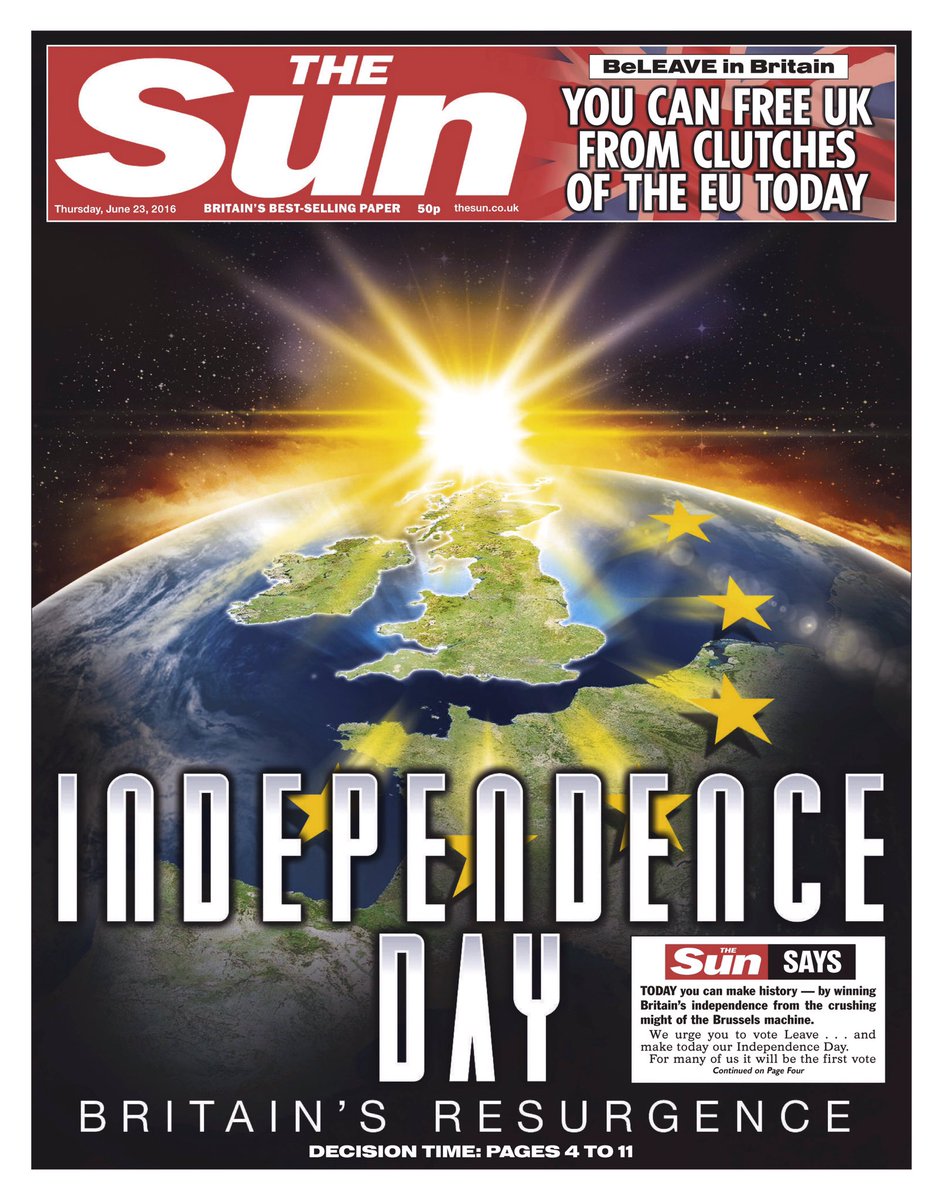 The movie was released by 20th Century Fox, which is a subsidiary of News Corporation, which also owns The Sun. Corporate synergy has never combined so many terrible things. (Later on in the year, The Sun would repeat the idea by showing a still of Donald Trump from The Simpsons on its front cover once Trumpy was president-elect. The Simpsons is also produced by a company owned by the News Corporation).

THE YEAR IN TV!

TV Show of the Year: The Crown. It took me a while to convince myself to sit down and watch this show about a young Queen Elizabeth II in 1950’s England, but once I did, it had me in thrall like no other TV show since The Wire. It’s not bingeworthy, and you will not be able to take more than two episodes at a time, but I was at work and looking forward to going home to watch anoth episode.  Set in a time period that we don’t know a lot about, and documenting a class of people that mostly we just assume we understand, in my opinion this is Netflix’s greatest show.

Sitcom of the Year: Bojack Horseman. If I hadn’t watched The Crown, this would be my TV Show of the year. I said it in this section last year, it’s one of the smartest TV shows around today .

TV Disappointment of the Year: The Walking Dead. I only watched the new season because my girlfriend made me put them on the TV for her.

THE YEAR IN MUSIC!

Song of the Year: Portishead – S.O.S.

If ever a song could define 2016, it’s this one: A depressing cover of a song that older people may remember fondly from the early 1980s.

Performance of the Year: The Swedish hosts in the Eurovision.

Here’s some 2016 music that I actually listened to and liked this year. Most are from movies, TV shows, and memes, which shows how in tune I am with modern music. All I can say is that you can make fun of Kanye all you want: he makes great songs even when he is quite obviously going through a nervous breakdown.

THE YEAR IN SPORTS!

Game of the Year: Liverpool 4-3 Dortmund. I am still upset that Klopp is not currently the Arsenal manager.

Goal of the Year:

Robbie Brady, Italy v Ireland. I was left speechless twice in two days in June 2016. The first time was when Robbie Brady scored this goal to send Ireland through to the knockout round of Euro 2016. Once the game ended, all I could do was try as best I could to say goodbye to the people I was watching it with in the pub. I went home and began making travel plans to go to Ireland’s next game in France (and against France!), the following weekend. I’m glad I didn’t book anything, because two days later, the Brits had voted for Brexit, and I was in no mood to celebrate anything.

Contrarian Statement of the Year: Leicester winning the league wasn’t a fairy-tale for me, it was downright depressing. All those years of getting depressed about Arsenal’s failure meant nothing, as Leicester showed any old team could do it if they play well. Arsenal can’t even complain about being outspent by their rivals anymore.

THE YEAR IN INTERNET!

Tweet of the Year: Those poor stateless kitties. The most poetic illlustration of the absurdity of Britains decision, in one simple tweet.

How do I tell them?? #Brexit pic.twitter.com/6Y7hRIKINi

Tragedy of the Year: The Death of Torrentz. To a certain type of person, Torrentz was an important part of daily life on the internet. A visit in the morning defined what movie/tv show could be watched in the evening. Many people have not recovered from their decision to liquidate, despite the emergence of torrentz2, which is a vastly inferior product.

Stupidest Meme of the Year: Uplifting lists of good things that happened in 2016. Scientific discoveries, pandas multiplying, disease eradication etc. are great, but people who write these things have missed the point. None of those things “happened” in 2016, they were simply the results of decades of work funded by the system that we soon will regard as the good old days.

THE YEAR IN REALITY!

Thing of the Year: The Internet. Like Anakin Skywalker, the internet was supposed to bring balance to the force, and no one really imagined that this would be a bad thing. One would have thought that by making all the information of humankind available to everyone that this would be a good thing, a new enlightenment that freed minds all over the world. Alas no, as all it resulted in was that different people believe in different facts.

Person of the Year: Vladimir Putin. I actually gave him this award in my 2014 version of this review, and all I wrote here was “because the whole world has gone to shite anyway”. How funny was I two years ago? And who would have thought that Russia would end up winning the Cold War?

Idiots of the Year: Liberals. While the world changed around them, the liberal heroes of the internet argued about how to construct a sentence that was in no way offensive. Like many liberals (myself included), we trusted enough in our opinions to know that what we wanted to happen in both Brexit and the US election would just happen. Liberal smugness like this is why the Right hate the Left. To win an argument, it isn’t enough to know that you are right. The Right think they are right too, if that makes sense. There are two extreme groups on the internet: the alt-right, and the always right. Neither are very pleasant.

The “Kardashian Award” for News We Shouldn’t Care About But Was News Nonetheless: Post-election/referendum protests. Many thought these were important, and that it could have led to something. It was just clickbait. A quasi-intelligent version of fake news, offering a glimmer of hope through archaic loopholes and laws, while ignoring the political situation completely. Brexit’s gonna happen, Trumpy will be president. You don’t have to accept it, but for gods sake why did you click on all that stuff about the Electoral College possibly revolting against Trump?

Well, I tried as much as I could to leave the current state of the world out of the mini-rants above, but as you know, the events of this year completely permeated every aspect of our culture, both on- and off-line. Here I have not even mentioned the carnage of Aleppo, nor the horrors of terrorist attacks in France, Belgium and Germany, or even the continuing suffering of refugees all over Europe. None of this is likely to improve in the near future, as well as the state of affairs with regards to climate change. Some of you may have noticed that I have been publishing less on this site recently, and all I can say is that this is a result of the events of this year. The things I write about really are not very relevant or interesting in comparison to things that have occurred in 2016.

That’s not to say I haven’t been writing: I just don’t see the point in publishing. On the night of the Brexit referendum, I wrote a blog about how Germany (I moved there this year) was a quasi-fascist state. I went to bed without publishing it, and I’m glad I did, because by the time I woke up, the United Kingdom was a bone-fide fascist state. A few weeks ago I wrote something about how Westworld was disappointing, but in this climate, who cares? I didn’t publish that either, but I hope to get back on track in 2017 with my usual aim of a new post every two weeks. Thanks to all of you who have read this far, or indeed anything I have written in 2016 or before. I’m not going to say 2017 will be better, but at least we are all now awake to what is happening. It’s not a joke anymore, but that’s not to say it can’t be funny. Have a great 2017, everybody!